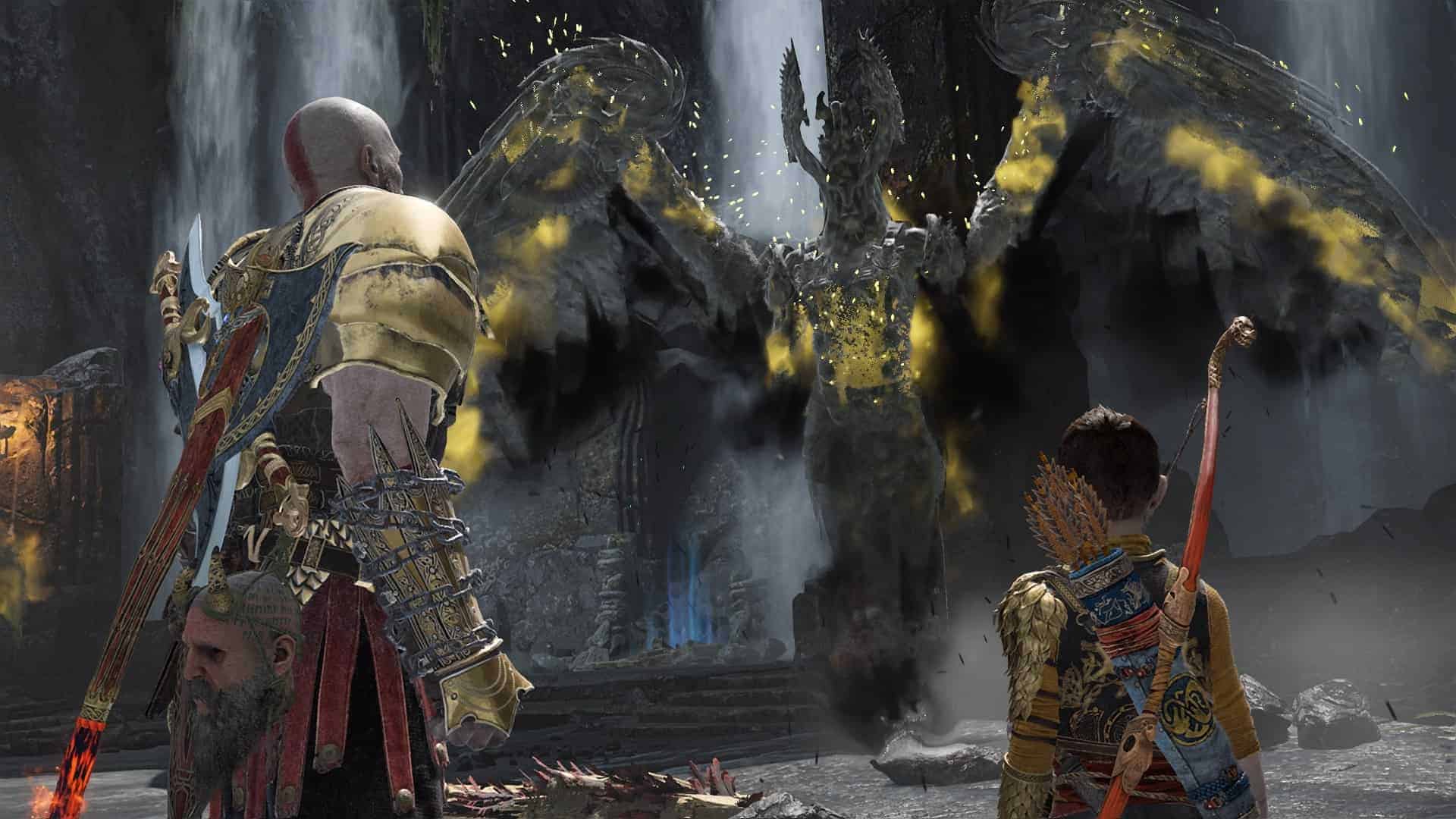 So we took out eight Valkyries in my last post – God of War – Valkyries and How to fight them.

Completing that is not a minor task, but by fighting them, Kratos & Atreus also had the chance to venture to the Valkyrie questline with the information from Mimir and the Valkyries you fought.

Turn out all these powerful warriors were trapped and neglect their godly task – Guiding the warriors to Valhalla. Upon defeating a Valkyrie, Kratos will obtain their helmet. At the moment you place the final helmet to these thrones, a suspicious Realm Tear will appear in the middle of this huge council. Upon opening this Realm…

Sigrun – Queen of the Valkyries

Standing in front of Kratos is a figure with the golden armor. This is Sigrun – the queen of the Valkyries and the one that sealed all her warriors to the physical form.

As usual, you will need to release her from this “suffering”.

At this stage, you are already well familiar with all the Valkyries move set. The good news is, there are no new fancy skill or any strange attack from Sigrun.

Boss Creation 101 – Give them more Health

Until this time, that is the longest HP bar in the entire journey. You can also notice that she is very durable compare to other Valkyries as well.

As mentioned, there are no new moves, but Sigrun is the master of all the abilities. She has all the moves, both the special one and the basic ones, combine into many deadly attacks. A small mistake will cost you all those hard times chipping through her HP bar.

Below is the moveset I listed in the previous post

All Valkyries are capable of these moves and will incorporate these into their attacks pattern.

Notes: These flying attacks can be easily countered by throwing Leviathan as soon as the Valkyrie fly up, this will stun them and causing the attack to be interrupted, however, try not to spam these axe throws as you will be caught off guard.

This time the Special Attacks are also available to Sigrun, and she will use it a lot during the fight.

These attacks are only used by some specific Valkyries (Goldul, Hildr) or shared between some later sisters, all are very powerful.

Sigrun is very fond of these Advance Attacks and mixing all of them in a very deadly way. Some noticeable combination:

This makes your chance of dealing damage to her very slim, below are the guarantee time where you can send out some Runic Attacks:

As this is the hardest fight in the game, make sure you bring with you the best armor set. The most beneficial armor set at this stage would be Ivaldi Amor – obtained from Niflheim – Unlocking and overcome Niflheim.

This armor set will give you a total of nine enchantment slots. In this fight, you may want to maximize your Runic Attack Damage, either by elemental increase enchantment or stat increment (Tyr’s Shard).

For Runic Attacks, you will want the ones that favor quick execution and can deal high damage in short burst.

I personally use these:

Unleash your Runic Attacks when chances show up!

Anything that suits your play-style. I personally use the Health Regen Talisman, but any Talisman that can give you some more boost in damage is a welcome addition.

Don’t forget your Spartan Rage. Use this when your health is low. All your attacks during the rage will recover a bit of the HP in turn give you some extra time to grab those Health stone on the ground.

Last but not least should be a resurrection stone. You can purchase the ultimate resurrection stone (10,000 hacksilver from Brok brothers) This will resurrect Kratos at full Rage, giving you another chance to sustain the fight.

Notes: The damage Sigrun receives will reduce over the time – as her defense will go up when the HP drop, later of the fight, all your attacks will deal less damage and she will deliver more deadly attacks. Be extra careful when her health is low!

After around 15 minutes (Assume all things goes well. I personally take three hours to finally win this fight in Give me Challenge difficulty) You will defeat the queen of the Valkyries and obtain the following reward:

This is by far the hardest fight in God of War. Be ready for a long fight and some frustrating death. However, beating this will also net you the “Chooser of the Slain” a trophy that took inspiration from the job of the Valkyries.

God of War – Niflheim – The Realm of Fog

God of War – Muspelheim – The Realm of Fire