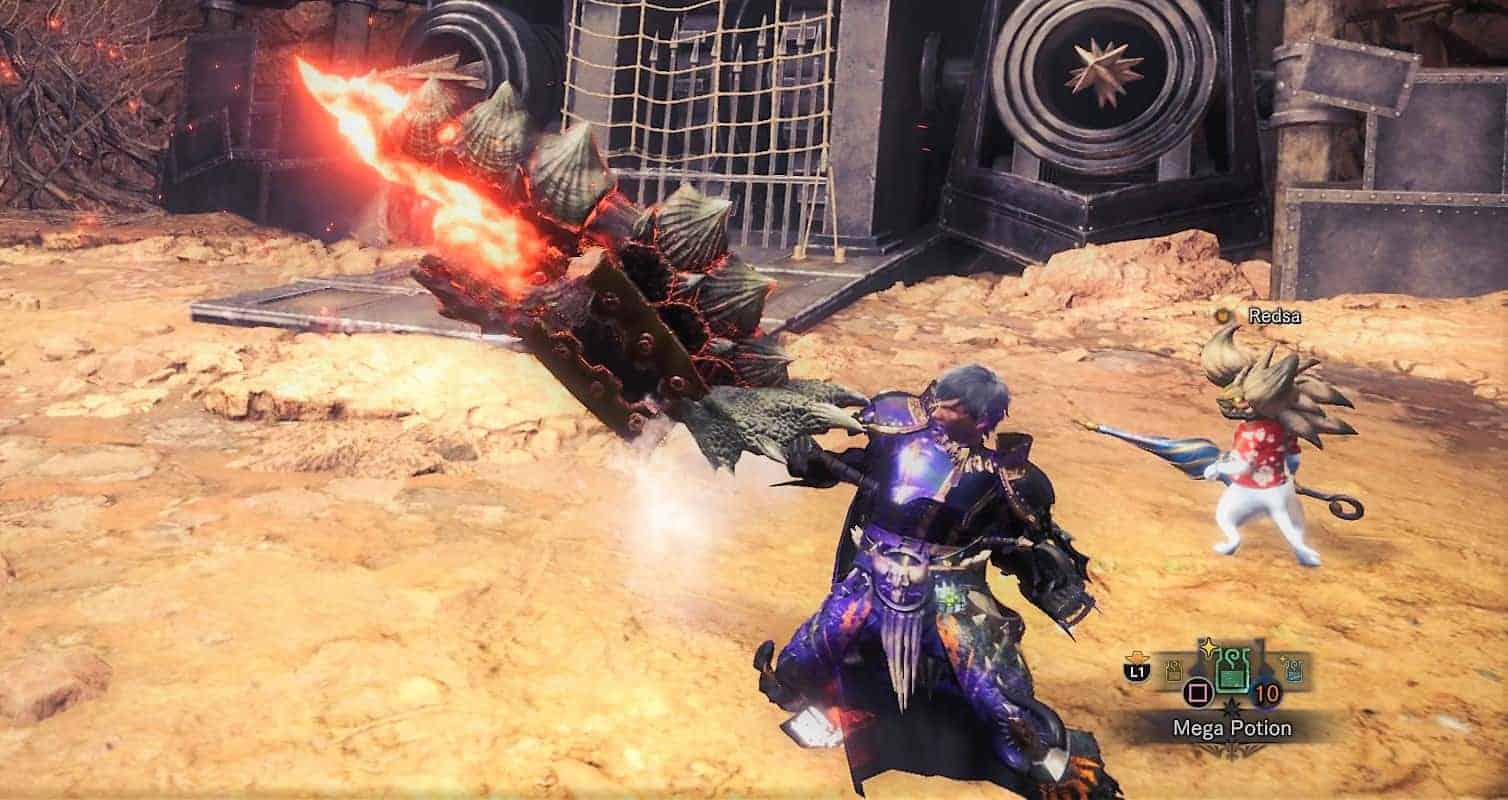 Howdy! Thanks for reading this guide. Please note that this guide covers the weapon before Iceborne! I will update this weapon guide in the upcoming days when I gathered enough material and got some real exposure with Iceborne monsters!

This guide still can be served as a basic tutorial on how to use the weapon and what armor skills are needed for a proper meta build.

In the meantime, you can check out the MHW Iceborne Guide in the posts below

Being as a Technical Weapon, Switch Axe got its resemblance from Charge Blade, another technical weapon that can morph between the sword and the axe form.
It’s basically the same here… but on the reverse! You start off Switch Axe with Axe form and powerup the Sword form during combat. After that, you unleash the most powerful attacks in sword form!

The starting form of  MHW Switch Axe. Axe mode attacks are slow, but deal high damage and has long reach. While it should not be your main combo for this weapon, knowing how to utilize Axe form is the first step to master the Switch Axe.

Three axe swing finished with an overhead slash, can be looped indefinitely, but mostly used as a starter for combos.

The hunter will move forward covering a wide distance with a thrust. This can be follow by the basic combo.

You will widly swing the axe until your little yellow bar (stamina) run out. While it can be a good damage dealer, the animation will lock your hunter in a place and widely open to attacks.

With that said, this is mostly used as a starter for the Sword combo (will discuss more below)

during any combo to fluily switch to Sword mode by a quick slash. There is another effective way to trigger this down below.

Similar to the Charge Blade – which you need to charge up the shield part with the Sword attacks. Switch Axe attacks in axe form to gather energy (indicate by the small bar in the sword icon) and finally allow you to transform the gigantic axe to a sword.

The sword form of Switch Axe bear a similarity to the Great Sword, but is imbued with speed and a powerful Elemental Discharge ability.

While this look cool and all. Suprisingly, it’s not the best way to dish out damage with Switch Axe. The unique trait of this attack is that its capable of charging up the amped state (indicate by the outer light of the sword icon)

Using the energy of the Sword, release damage and finish with a big explosion.

This can be used as an evasive option when nessesary

Attacking during Sword mode also fill up the area around the sword icon. When this is full, you will trigger the Amped state of MHW Switch Axe.

During this state, your attacks will also dish out the additional explosion damage corresponding to the Phial types of the current Switch Axe. While this sound familiar if you played Charge Blade before, there’s a catch – The phials of MHW Switch Axe is divided into the following:

Notes: All these effects can only triggered during Amped State! Sword mode attacks will help you achieve this state. This also highlight the agressiveness playstyle of this weapon. You will need to maintain the uptime of this state during the hunt.

Best way to play MHW Switch Axe is to understand how to use the morph mechanic effectively. While the Sword mode offers significantly damage and speed, it’s easy to get carried away while performing that fancy Heavenward Flurry and is forcefully morphed back to the Axe in an awkward motion.

This is the last thing you want to do while using Switch Axe. With that out of the waw, the key thing to remember is to use R2 at the right time and manage that little bar on the top-left corner

Below are the most common combos to use when in Axe mode to “switch” into Sword.

This is the best combo to quickly switch from Axe mode to Sword mode. By morphing during Wild Swing, the hunter will perform a wide attack (similar to a cyclone) and switch to Sword mode in the process.

This swing attack right before the morp is also produce highest damage in Axe mode, making it a perfect candidates to wake the sleeping monster.

Wild Swing to Sword Morph also produce highest Axe damage. But please, do not follow the below gif…

Alternatively, you can change to Sword mode anytime by using the normal R2 method, this is also useful, just make sure you are not switching while the gauge is low.

All of the best combos of MHW Switch Axe come from Sword mode. Knowing which moves to utilize and when to stop and morph back to Axe is the key thing to master MHW Switch Axe

Another thing to mention here is the ability to charge up the Amped state of Switch Axe. While each attack during Sword mode is capable of filling this gauge. The most useful one is the Heavenward Flurry (That fancy jumping roundhouse slash)

The most common mistakes while playing Switch Axe is swinging the sword without any ideas to manage the sword gauge.

After that, the most commonly used combo to deal damage is the Basic Sword Combo follow up by the Double Slash.

After my failed Element Discharge, I followed this up with the Basic combo of Switch Axe follow by a double slash.

This should be your main asernal to dealing damage in a short time.

During this combo, you can either roll out with … at any time, or if the chance come in, follow this with the Elemental Discharge

This glowing sword does look dangerous!

This is the “ultimate” of MHW Switch Axe. At any time during Sword Mode, pressing

will allow the hunter to thrust the Sword forward, releasing the power inside in a big explosion.

If you perform this during Amped State, the hunter will leap onto the monster, and deliver the explosion “directly”. It’s worth mention that this will also automatically morph your Sword back into the Axe after the finisher.

You can cancel this at any time by pull back on the analog and press triangle.

While this move is certainly powerful, don’t rush and spamming this left right and center as even when it’s “look like” mounting, you still take damage and under effect of any attacks.

Even roar can also disrupt this skill. So just like any powerful finisher, use it when you guarantee that monster doesn’t have chance to escape.

Let’s take a look at what is the key armor skills that can empower a good Switch Axe build. As usual, we start off with the Attack Boosts one.

Anything that help increase your damage counts

As the nature of your combo and attacks, below armor skills can be considered as Core Switch Axe skills:

This speed up the fill rate of your Sword – giving you the chance to cause more havoc with that powerful Elemental Discharge.

This is used to maintain the Amped State of the Sword mode, while this may get a little tricky to come up with a build solely on armor for this particular skill. You probaby want to farm for that little jewel instead.

For Affinity – Who doesn’t love a little slash icon for critical?

This is the build I picked for my playthrough with MHW Switch Axe. In a quick catch, it gives us the following armor skills:

As pointed out in the comment section. This was updated

For Head Armor, I go with Dragonking Eyepatch Alpha –  a safe choice when it’s come to High Rank armor, this provides you with one level 3 slot which can give you some more customization. I add in the Tenderizer Jewel 2 to max out the Weakness Exploit.

For Chest Armor, you can pick a Safe choice with the Drachen Chest (Give us 2 points in Critical Eyes & 1 point in Critical Boosts)

Nergigante Coil & Greaves – This is pretty straightforward to increase your damage

The Jewels I used in this build:

Elemntless Jewel is a rare one, but the skill it’s provided is a must have for any build related to raw damage weapon (non elemental) which this build focus on

For Charm, it’s more on the situational side. If you prefer a more aggressive approach, any charms that enhance the attack skills mentioned above is fine.

For me personally, I used the Master Charm just for the sake of improving the Affinity of the current weapon

Axe of Demons – The name says it all

This Diablos’s product (again) stat speak for itself. Bearing highest damage in Switch Axe tree, combine with Power Phial, you have yourself a cannon.

This is also the reason that you need that Elementless Jewel it will further boost the damage of this weapon to an impressive number. Just like other weapons from Diablos, this also have Ice as Hidden Element – if you want to use this, sneak in some Free Element armor skills to unlock it.

The above is just a quick starter if you don’t have them fancy jewels. As almost all of the end game builds rely very heavily on the Decoration part, which is a pain given the RNG nature of the game.

If you are wondering what should be your next weapon, and you are interested in the weapon that can change form, or testing the water with Technical weapon, Switch Axe is a great choice.

In general, it does not take much time to get used to MHW Switch Axe once you know the basic grasp of other melee weapons. Compare to MHW Charge Blade, the Switch Axe’s learning curve is more accessible and you will not run short of any cool-looking attacks.

With the upcoming Icer Borne updates, it’s time for you to spice up the weapons mastery tree, Why not “Switch” Axe?

My Ranged weapon guide so far:

My latest weapon guide for MHW Iceborne is the Hammer! If you decide to switch to a new weapon during your Iceborne playthrough, make sure to take the hammer into your consideration!