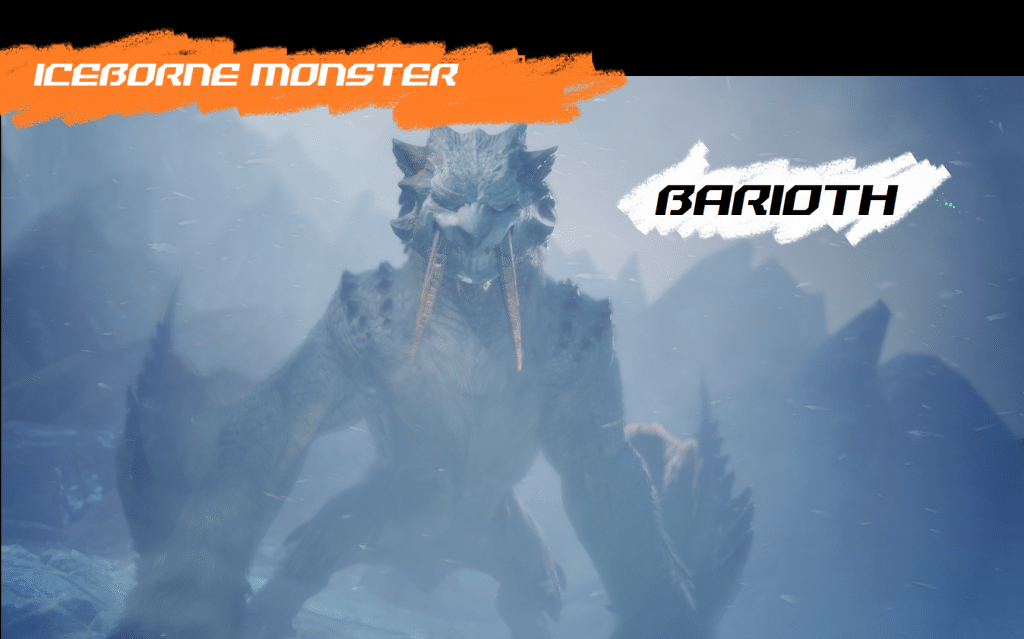 Similar to Glavenus, Barioth will be introduced when you progress through the story of Iceborne. The monster first appearance is in the quest Blizzard Blitz.

Unlike other subspecies fights you already completed at this point. Barioth provides a nice challenge when you first fight him.

As a cat and fanged wyvern, Barioth is very fast and can jump to your place in just a blink of an eye. Despite the long teeth, I rarely see him bite.

Again, you are safe with a Fire Weapon or a Blast one.

The most dangerous attack of Barioth is when he jump up and perform a big slam on the ground. This can take ~50% of your HP if you are still mixing up armor from High Rank.

Occasionally, he will jump to the wall and shoot out Ice Shards.

He can also inflict Ice Blight, which will increase the stamina consumption and reduce stamina recovery rate. This is a big no-no if you plan to use the Clutch Claw, make sure you have some nullberry to counter this.

Finally, don’t forget your Clutch Claw! Check out my Clutch Claw guide on how to flinch shot the monster!

You can check out all of the Iceborne Master Rank Armor set in my post below:

Similar to Low and Master Rank armor, the Alpha variant of the monster in Iceborne give you more Armor Skill in exchange for jewel slot.

The smithy in Iceborne will also give you a new Level 4 Jewel at the beginning of the hunt – Which will give you two points of Critical Eye!

Barioth armor can be used with heavy stamina drain weapons like: