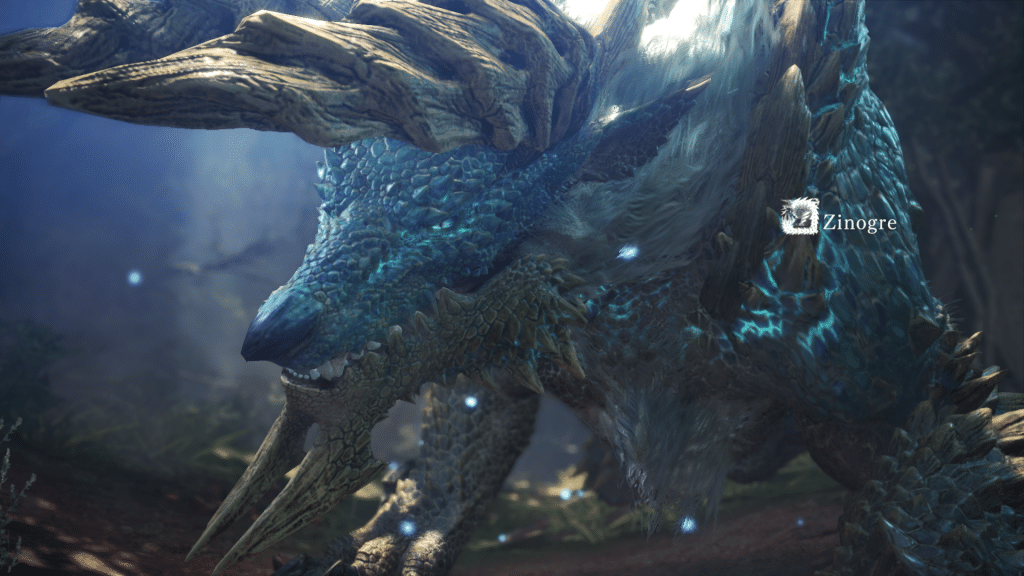 SPOILER ALERT! Zinogre is one of the end game content in MHW Iceborne! If you have not finished the main story, stop reading!

Firstly appear in Monster Hunter 3 Ultimate. This lighting monster has time and time again capture the heart of the hunter’s thanks to it’s unique design and power.

With the main element of Lighting. Zinogre is capable of strong lighting attacks while utilize it’s hulking frame to deliver devastating blows to the hunters.

Return in Monster Hunter World as one of the post-game content for Iceborne. This lighting fanged wyvern still hold it’s iconic moveset and an aggressive personality.

Unlike other return monsters (Barioth, Tigrex or Brachydios) The Zinogre does not automatically appear in your assigned quest list.

However, to finally start the fight with Zinogre, you need to finish a full investigation process for the species Fanged Wyvern in The Guiding Land.

This require you to fight and break parts of similar species (Other Fanged Wyvern like Jagras) and advance the investigation bar.

When this is full, you can then Lure out the monster by talking to the Handler at the camp.

You can then choose a designated area of the current map to lure out the monster. I recommend the Ancient Forest area for the ease of traversal.

You still need to pinpoint the place where he appears though!

After all of that, you can finally face the Zinogre!

Zinogre main element is Thunder, and he will surely remind you of this during the hunt. Zinogre will have two states during the fight, a normal state and a super-charge state (When he is covered in Lighting)

One unique characteristic of this Lighting monster is that his Lighting are empowered by Thunderbug on his fur!

Zinogre attack mostly consists of Lighting shots and some big area slam. Below are his most common combo:

Overall, to fight Zinogre, you will need to equip some end-game master rank armor to make sure you can withstand those back slam and lighting attack.

High resistance to Lighting is desirable, but upgrading your HP bar and recovery options are the main priority.

As Zinogre is very agile, using the Clutch Claw will require careful timing (when he is not moving too much or in the middle of attack animation) Mantles like Rocksteady or Temporal is also a great help when you decide to use the Clutch Claw.

Make sure you know how to perform the Flinch shot though! You don’t want to miss that opportunity to knock down Zinogre!

Clutch Claw Guide – How to Flinch Shot a monster!

Defeating Zinogre will give you access to the Zinogre Armor. One of the best-looking armor set in MHW Iceborne.