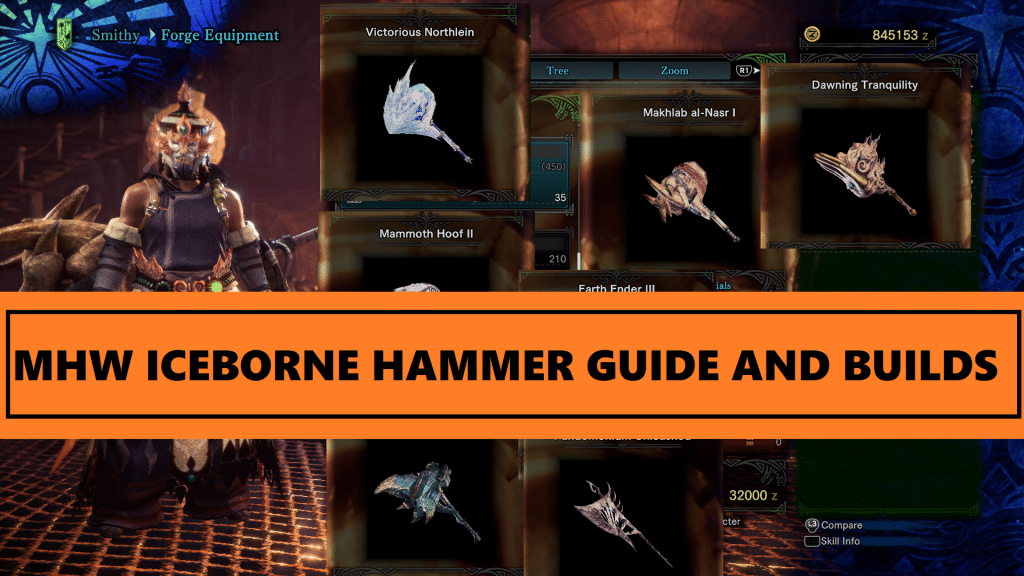 Below are the in-depth break down of the current best Hammers in MHW Iceborne!

A detailed guide on MHW Hammer in regard to Iceborne expansion. I have been playing with the hammer since Iceborne release on September 6, and I am happy to report that this is one the best weapon to play in the MHW Iceborne Expansion.

I will cover the basic Hammer Moveset (including the new move from MHW Iceborne) as well as the advance combo and the best tips to become the Hammer bro!

Hammer is one of the weapons in the arsenal since the very first release of Monster Hunter. Which mean it has appeared since 200

The hammer does not have any fancy combo that require you to morp your weapon or anything. Most of the moveset are pretty straight forward

I knocked the Banbaro with the Golf Swing and quickly follow up by the Big Bang combo. This is one of the most efficient move for MHW Hammer.

Similar to Great Sword, the main damage source of Hammer come from the powerful Charging Attack. However, you don’t need to time the release on time to get the most damage.

The only thing to notice when charging your hammer is which move you gonna unleashed.

You can press R2/ RT at any time to start charging. This charge last up to 3 level (Indicating by a red flash and minor vibration on controller for each charge) When you release R2, depend on the charge level, you can then unleash a different attack.

This is definitely your best option when you want to quickly land a stunning blow to the monster! But make sure you release R2/RT at the right time! As this may result in the spinning attack below and can leave you wide open to monster’s attack!

This spinning attacks might look fun to perform, it is not the most efficient attack for MHW Hammer. This is pretty situational and should not be used as your main way to stun the monster!

With Iceborne, Hammer gains several new moves related to the Clutch Claw, the newest toy in the arsenal.

You can now perform a Slinger Shot while charging with R2/RT. This look innocent at first, but can be used as a quick and dirty way to build up the stun meter.

The second ability is the clutch claw link attack. After a successful Charge Attack, (level 2 or 3) You can perform a Clutch Claw move by pressing L2 right afterward.

Depend on your charge level, it could result in a Spinning Hammer Attack or a simple Clutch Claw shot

As Hammer cannot cut tails being a blunt weapon. Stunning the monster become your main priority. To do this, you must carefully aim each of your attacks to maximize the chance that it is landed on the head of that monsters

One of the most common mistake is not knowing which Charge Attack to use when hold down R2/RT. Depend on your current situation, you should land that Quick Shoulder Up Swing or Simply stand still and perform the Smash instead.

Here, I land the Level 3 Power Charge Hammer Attack and knock down the poor Banbaro.

After successfully stunning and knock the monster down. Simply navigate close to the monster head and unleash your Smash combo.

Your main playstyle when using the hammer will be like this

But not yet, you have new move!

With Iceborne Released, you can now fire off Slinger Burst during your Charge move. This may not seem much at first, but if you are confident, this can be used as a quick way to build up the stun meter!

The next combo you should perform is the Spinning Claw Attack. After a successful Charge Attack, (level 2 or 3) You can perform a Clutch Claw move by pressing L2 right afterward.

Depend on your charge level, it could result in a Spinning Hammer Attack or a simple Clutch Claw shot

This let you quickly use the clutch claw on the monster and weaken monster part in the process. Upon landing, you should aim for the weakned part for free damage boosts!

With Iceborne release, you will now have more option to finally build up a powerful hammer builds. This includes the newly expanded cap for Slugger Armor Skills from Diablos set, as well as several new option for the weapons.

Previously, a meta builds for hammer will look like this:

As for weapon choices, you can quickly start off Master Rank with the Kulu Weapon tree, as the Makhlab al-Nasr I provide you an impressive 1092 Damage with 25% Affinity. This beast is also pretty easy to hunt.

The upgraded version of this hammer – Makhlab al-Nasr II give you 1352 Damage with the same 25% Affinity.

Combine this with Elementless and you already got a high damage hammer build! If you prefer the maximum damage and don’t mind the Affinity, you can opt for hammer like the Grinding Mallet.

The rest armor skills entirely depend on your playstyle. But the best option is always to maximize the Affinity and damage.

With the addition of set as Glavenus Armor Bonus (Maximum Might Secret), You can now achieve this with minimal effort.

Below is a quick mid Master Rank build that I used while playing Hammer.

Hammer is one of the easiest weapons to pick up thanks to it’s powerful attack damage and straight forward play style. If you want to change the pace after weapons like Sword and Shield and looking for a meaty weapon, why not pick MHW hammer?

Let us know your current hammer build for MHW Iceborne!

The list below are the weapon guides I published previously pre – Iceborne. I will shortly update all the guide with the new gears from MHW Iceborne, stay tuned!