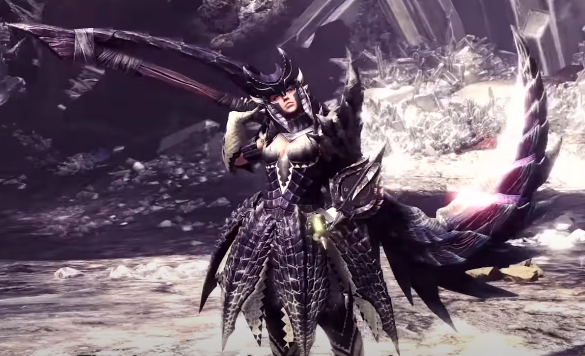 Longsword has come a long way since the release of MHW Iceborne, Longsword builds until Fatalis is always about Master Touch, occasionally put in some fun skills like Punishing Draw or Punishing Impact.

With Fatalis, you can now free from Master Touch. This is all thanks to the powerful armor skills Fatalis provided, and the generosity of all those level 4 Decoration slots.

Your most powerful damage attack – The Helm Breaker is often used when you are guarantee that it will land. Most of the vets prefer to only use this when the monster is down

Mastering Foresight slash, Foresight Slash is your only way of defense while using the Longsword. Despite the initially awkward movement, actually use the Longsword is pretty intuitive.

Below are some meta armors (Pre and Post Fatalis path)

Before facing Fatalis, this could be your build. Master Touch eliminate the Sharpening time, allow you to do more Helmbreaker. The Agitator bonus from Brachydium armor also increase DPS, what not to like about this build? (Actually yes, you sometime don’t need that Latent Power, and you lack decoration slot to put in more jewel)

For Longsword, the Punishing Draw bonus from Frostfang armor increase damage of the Iai Double Slash, and the Iai Quick Draw skill as well – which make Punishing Draw a requisite to Longsword. This armor set doesn’t have Master Touch, so it does require you to have skills like Handicraft if you want those Sharpness back.

Do I need to explain more about the over power level of this armor set?

Below build is listed mostly base on progression play. The final builds will be Fatalis Longsword builds – which are the meta right now.

This is the best Longsword build if you still in training for Fatalis fight. This set is all about meta. You get Agitator from Brachydium Armor, Punishing Draw for your Longsword combo, and also Master Touch to eliminate the need of Sharpening.

The problem with this build is the grinding aspect, it may take quite sometime to max out Safi’s Shatterblade, and will require some luck to roll that Teostra Essence on the blade (For Master Touch) If you don’t like this, check out the next build

Lightbreak Edge is easier to get compare to Safi’s Shatterblade, and doesn’t need any more grinding aside from Augmentation. It also has higher Blast compare to Shatterblade (But can be useless in multiplay)

This build is generally easy to use in Guiding Land, and for monsters that loves elemental blight (Gold/Silver Rathalos) which will trigger Coalescence – further increase your DPS and Affinity.

Whatever weapon you are currently using, Fatalis Armor is definitely the meta now. Inheritance let you utilize QoL skills like Divine Blessing and Agitator Level 7 together with ease. Longsword is also not out of this update, your main goal for Longsword in the endgame is to get Fatalis Armor and weapon.

Weapon – Fatalis Zaggespanon (How to pronounce it?)

Fatalis Longsword has 1155 Base Damage – the highest there is on the Longsword tree. This is balanced by a typical negative Affinity, making getting back Affinity is your main goal if you plan to use Fatalis Zaggespanon. The first build utilize Maximum Might (Boost your Affinity while stamina is full) This skill is still in the controversial state, but for Longsword, most of your powerful attacks don’t require stamina, so it can be a great boost to Affinity.

Weakness Exploit & Critical Eye can be maxed out easily by using the Alpha variant of Fatalis Armor (Dragonbarbs Alpha, Dragonclaws Alpha) Dragonhide Beta also come with Weakness Exploit, so you are good to go with these pieces. These pieces also maxed out Handicraft, an essential skill as you don’t have Master Touch now.

While you can use Dragonhelm Alpha, many Longsword players prefer the Punishing Draw bonus from the Frostfang Armor set. Frostfang Helm Beta can be used for this, this also helps you max out Critical Eye.

With Fatalis 2 pieces bonus Inheritance, you can now freely use Agitator level 7 without Brachydium Armor bonus. This skill can be maxed out by Challenger Charm V and one Challenger Jewel 4 (Either on your weapon or on those level 4 decoration slots from Fatalis Armor) Max out Attack Boosts is relatively easy with Attack Jewel 4 (If you have a lot of them…)

The addition of Shaver Jewel in the Melding Process (From Fatalis Update) also let you used Shaver Jewel for a boost to the Clutch Claw attack.

ethugamer October 21, 2020 No Comments
Looking for a meta Lance Build for MHW? You come to the right place.
Read More

ethugamer October 16, 2020 No Comments
This is the end of meta in MHW. Fatalis is here! Have you switched of your coating and craft the best bow builds?
Read More