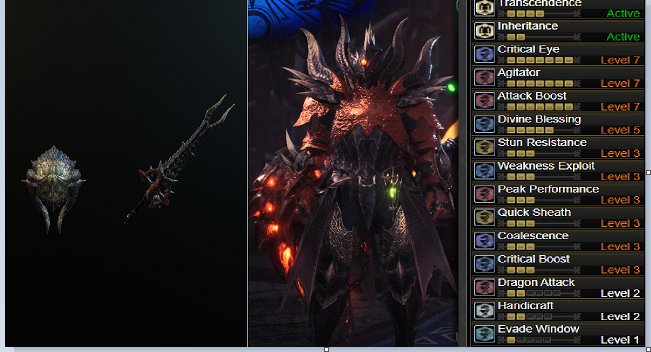 The Fatalis delivered one of the best weapons and armors for MHW meta. In this guide, we take a look at the current best Sword and Shield (SnS) builds in MHW, featuring True Fatalis Sword, Fatalis & Arch Tempered Velkhana.

This guide will also discuss some of the best ways to play as SnS, featuring this awesome speed run by Zen

Fatalis Armor | King of the Meta

Aside from giving you the best decoration slots available, Fatalis bonus skills Inheritance and Transcendence unlock the level cap of any Secret Skills (Divine Blessing, Free Meal…) as well as boosting your HP/ Stamina to it’s max level when you start the fight.

You are good to go with 4 pieces of Fatalis armor. As Dragonhead provides you with Stun immunity, most players choose this in their build.

The remaining armor pieces depend on your preference and playstyle. Currently, there are two most common pieces of armor that are combined with Fatalis

A nice addition to max out Critical Boosts, this also has a boosts to Peak Performance. If you already Health Augmentation, Peak Performance is pretty easy to proc. If you don’t like Peak Performance, pick the beta variant and you will have a free level 4 decoration to use.

From Arch Tempered Velkhana, this piece max out Peak Performance and add a nice utility skill – Quick Sheath. SnS has higher sheathing speed compare to other melee weapon already, but this can make the animation even faster! allow you to perform crazier maneuver with SnS.

Depend on your pick, the following can be used as a base template for SnS Meta Build

After picking a template for your SnS Builds (Either Kulve Taroth or AT Velkhana Leg) you can then think about what skills you want to prioritize.

For comfort and general hunt (Guiding Land) Skills like Divine Blessing, Free Meal is pretty good to have. You can add in Gobbler (Speed Eating) for a more optimal experience.

For multi-players, add in Wide Range and you will guarantee to get the Support Specialist medal at the end of the hunt.

This is where Fatalis Armor shines, with all those level 4 decoration slots, maxed out support skills like Fast Eating or Free Meal can also let you increase more points for offensive skills like Critical Eye and Attack Boosts (Gobbler/ Attack Jewel 4 or Satiated/ Expert Jewel 4)

With this build, you still get powerful DPS skills like Agitator level 7, an addition boost is Peak Performance

This is pretty straight forward. Let just drop all those healing and eating boosts, bring in those Attack Jewel 4 and you are good to go.

Dragon Jewel 4 is also used to enhances damage against monsters that are susceptible to Dragon Element. For other monsters, the raw number is enough.

AT Velkhana updates the Frostcraft Build for SnS. The full set will provide you all the utility skills you need for Frostcraft Build (Quick Sheath, Critical Draw) This build is also pretty unique to use and can be used for general play if you are bored with that Black Dragon look.

Other SnS Build with Fatalis

The main advantage of Sword and Shield in MHW is always about flexibility. With SnS, you can block with your shield, stunning the monster with Shield Bash, evade the monster’s attack with Leaping Slash. Did I mention elemental build with SnS?

With the help of Fatalis armor, you can now freely choose some other unique element for your SnS builds

In the above video, SnS Fatalis build with Kulve Taroth’s Wrath was used.

The hunter used Heroic (upgraded level cap with Fatalis armor) to increase 40% Damage and 150 Defense while active. As Heroic is activated when your HP is below 35%, True Fatalis Sword is augmented with all three Affinity, thus increase True Fatalis Sword’s affinity to 25%.

Maximum Might is maxed out to compensate for the lack of Critical Eye in this build. As Maximum Might depend on stamina, this dude also adds 1 point in Consitution with Mighty/ Physique jewel.

Tool Specialist is used to reduce Mantle cooldown, boosting DPS in this fight.

This build doesn’t have slots for Divine Blessing, survival entirely depends on Dodging, making Evasion Window is a must (Maxed out with Mighty/Evasion & Phoenix/ Evasion Jewel)

This approach is definitely not for new players to SnS. All QoL skills are dropped for the sake of DPS and DPS only. Another thing to note is that this requires superb experience with SnS, as you fight Fatalis with 35% of your HP all the time without any recovery method.

In the above video, the following techniques were used to increase DPS as well as survive Fatalis’s powerful attacks.

If any of the below is too hard for you, don’t even try to use this build!!!