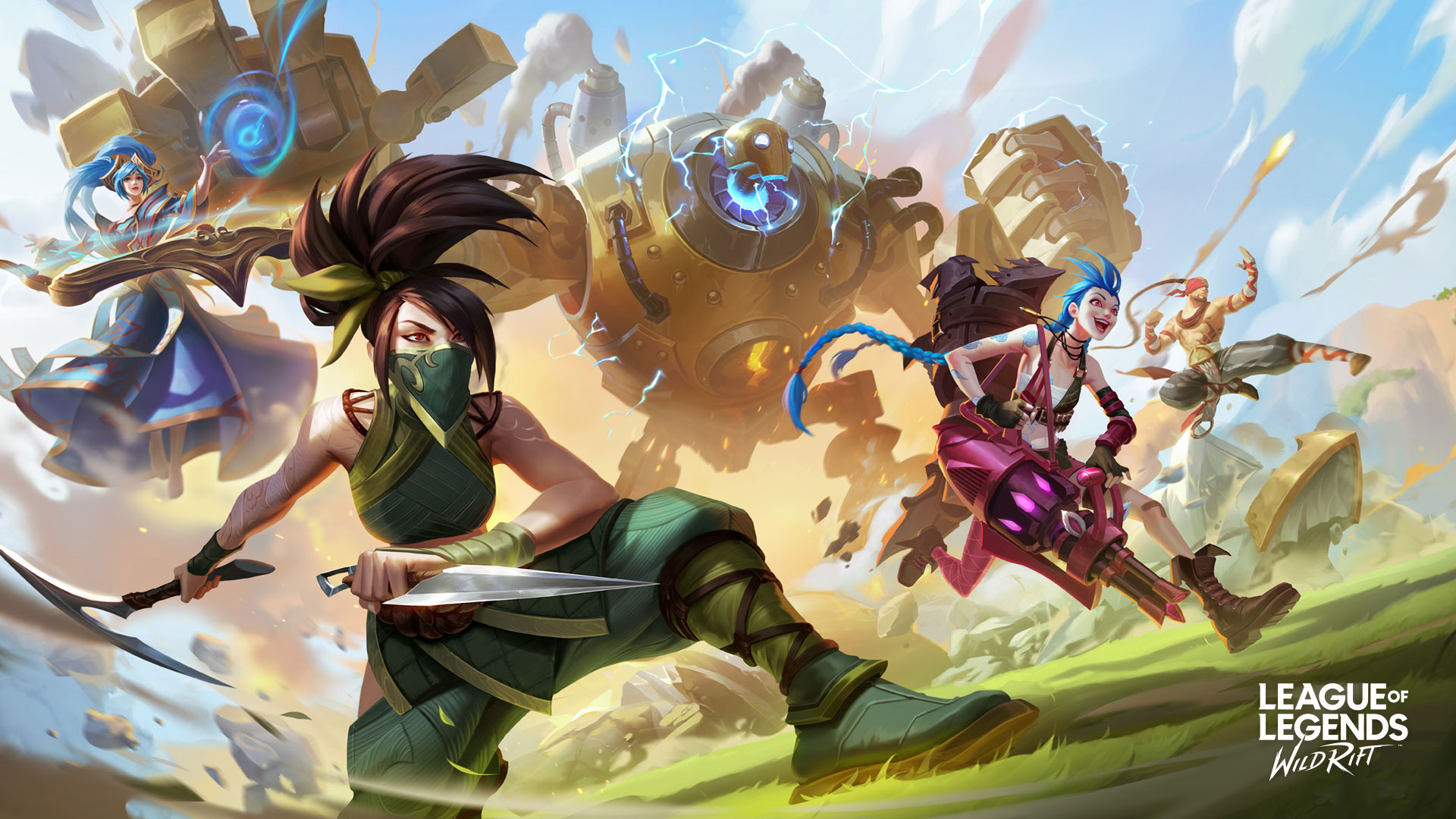 League of Legends is starting to pick up speed amongst mobile users, especially with its release on mobile platforms through Wild Rift. Just last month Wild Rift was released in more countries across the world for gamers to enjoy.

Remember to get some Google Play Gift Cards to fully enjoy the game!

With that in mind, players might be wondering what champions are better suited for what role, as it is a crucial part of the gameplay. Your champions are part of what determines your victories and failures, so that’s why we’re here to deliver the best champion suited for each role.

The Top Lane or Baron’s Lane is suitable for champions who are in the Fighter, Tank, and Assassin class. Top Laners should be strong characters that can hold their ground without being a burden to their teammates, a leader with no babysitting required. This all depends on which character you choose and your preferred playstyle of course.

The Hand of Noxus is a Juggernaut champion that wields a Noxian axe, ranked by most as an S-tier champion in the Baron Lane. He is known for being brutally strong and an overall aggressive character, suitable for the role of Top Laner.

For his passive ability, Darius has Hemorrhage which causes enemies hit by his basic attacks and abilities to bleed for five seconds. This deals 12 physical damage and grants them a stack. When five stacks are reached, he gains Noxian Might for 5 seconds with 29 attack damage which then applies full stacks of Hemorrhage instead of 1.

Darius is known for his aggressive playstyle that focuses on melee attacks with his axe. In a situation where you are trying to defeat those who use close-range battle tactics, plan your attacks to harass them from a distance instead with Crippling Strike or Decimate.

When you initiate a fight with your enemy, remember to use both Apprehend and Decimate to start stacking Hemorrhage. This way it would be more difficult for them to fight back as they are temporarily immobilized, not to mention the life steal. Only use Noxian Guillotine as a final resort or upfront early on in battle since it does a good amount of damage.

As a Top Laner, the objective is to stop as many enemies as possible while protecting your team. Make sure you have a plan or a vision in mind and keep an eye out for any ambushes from the mid and jungle lane.

The core of your team and a role that is not for the faint of heart. It is even noted as one of the hardest roles to play in League of Legends due to the vast knowledge and tactics needed.

Known as the nine-tailed fox, Ahri is a mage and assassin class in Wild Rift that deals with magic damage and spell casting abilities. Most prefer her in the Mid Lane as she is also known as a Burst champion. Burst champions are those that inflict large amounts of damage in a short amount of time, even resulting in immediate deaths before the other person could react.

Ahri’s passive ability Essence Theft would allow her to gain a stack when she hits an enemy with any ability. Her orb will change color when she has enough stacks, giving her a small 30 heal the next time you use one of her abilities.

As a high burst and high damage champion, she can crowd control enemies which help in the heat of battle. As a mage, she can get a little mana hungry so make sure to monitor your mana usage as you go along. Remember to keep an eye out on the sides of the center lane in case of an ambush.

Improving your aim when casting Charm could help you hook enemies easier which leaves them lower on health. You could then send them running with your Fox Fire or Ignite. Don’t waste your ultimate and learn to realize opportunities in which you should use it to your advantage.

Also known as the Dragon Lane in Wild Rift, the bottom lane is a crucial lane that could make or break your victory. It is a fragile section that requires high agility, skill, and damage at the same time.

One of the few champions in Wild Rift that is hard to kill due to his Arcane Shift ability, Ezreal is a marksman and mage class. He is known as a range champion that can deal heavy physical and magic damage while being elusively agile.

His passive ability Rising Spell Force allows him to increase his attack speed each time he hits an enemy with his abilities, stackable up to four times.

First and foremost, Ezreal is a marksman and is known for his great range due to his hybrid nature. He is able to deal damage physically and through magic, which makes him a very flexible character to have. But in order to fully utilize him, you would need to learn to control the way you use his abilities.

Always observe the movements and patterns of your enemies, as Ezreal uses mostly ranged attacks. This could help you predict movements and ensure you always hit your target. If you get the chance, remember to fire your Essence Flux orb at your target to frustrate and weaken them further.

Earlier on in the game, it may be difficult for you to focus your attacks with the low amount of mana you have so it’s best to just kill them however you see fit.

Aside from that, try to save your Arcane Displacement for two situations: attacking an enemy with no protection or to run away/avoid their abilities at the end of your life.

To be a support means to offer assistance to other players where necessary so that everyone could do their job effectively in the game. Support usually plays in Dragon Lane with the AD Carry/Bottom Laners. They need to have good crowd control skills in order to properly care for their team.

A tank and support class in Wild Rift, Blitzcrank is a champion known as The Great Steam Golem. A fully mechanical creature that stays true to the ‘tank’ name.  Some people prefer him in the Baron Lane/Top Lane due to his damage and massive size, but we’ll let you decide on your own in that matter. As a tank with magic damage, we prefer him on a support role instead.

Blitzcrank’s passive ability Mana Barrier is very helpful as it gives him a shield that could absorb 104 damage (30% MR) for 10 seconds when he falls below 35% health.

Blitzcrank is known as a utility-based champion, he can pick off enemies with his Rocket Grab, locking them down for an easy kill. Even so, this uses a lot of mana so don’t spam it – especially when you’re in the early stages of the game. It is said that he was designed to be played as a Top Laner as his damage is considerably higher than most champions in the support role, so take advantage of that through his other skills.

To fully utilize his Mana Barrier, make sure you take the chance to do something risky that could turn the tide to your advantage. As the shield uses your current mana, be aware of your mana usage before attempting something. For Overdrive, make sure to time it perfectly in order to land a blow or to run away when things go wrong.

For Power Fist, using it in rapid succession after delivering a basic attack could ensure a quick and effective amount of damage. When it comes to Static Field, don’t be afraid to use it as it has a relatively fast cooldown.

The main role of a Jungler in Wild Rift is to harvest and clear the neutral monster camps located in the jungle in between the three lanes as well as securing the objectives located around the map. They collect/harvest gold and experience in order to keep up with their teammates.

A blind monk and famed martial arts master of Ionia, Lee Sin is a diver champion with good mobility and high damage. He is a melee fighter known for his skills that double as combination moves.

Lee Sin’s passive ability Flurry grants a 50% bonus attack speed for his next 2 attacks within 3 seconds. The first attack will restore 20 energy and the second attack restores half that amount.

A champion that is highly focused on melee combat but is one of the best champions as a Jungler due to his high agility and continuous damage output. With Safeguard, he has the ability to enter and exit battles whenever he wants which makes it easier to aggressively attack enemies and run away.

For Lee Sin, knowing how to combine his moves are what makes him a valuable champion. The combination of Shock Wave, followed by Resonant Strike and Tempest is a lethal move that could prove to be useful.

Safeguard and Dragon’s Rage could also be used hand in hand by entering fights with a strong offense and escaping effectively by launching an enemy out of range when things get out of hand.

That’s all we have for this mini character guide of sorts. Hopefully it proves to be useful in your search for the best characters for your team. Do let us know what you think in the comments section below!