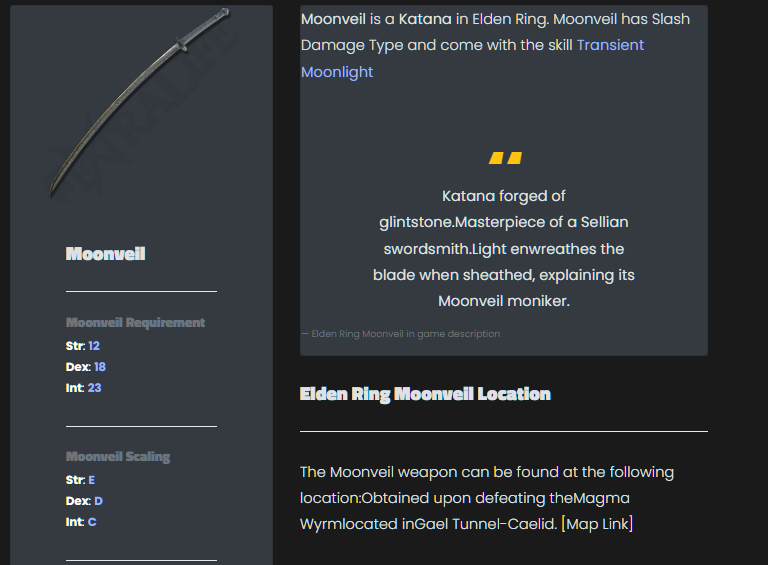 In this post, we take a look at all the best Dex (Dexterity) weapons Elden Ring, where to find them, and why it a good pick for your next Elden Ring build.

Dexterity has been one of the main attributes in Souls Games since the release of Demon Souls. Dexterity is often associated with weapons that require finesse. All Dex weapons often comes with unique moveset – which make them very popular in many Elden Ring Builds.

In this list, we divided the weapon base on weapon type, so you can take a look at what is good for your current build. For each weapon, there will also be a quick comparison on why it’s good, and when it should not be used.

Despite the small size, Daggers have been powerful weapons in both PVP and PVE in the Souls series. Often used by skillful players and the guys who prefer the parry move.

Starting off this list is Parrying Dagger. As the name suggest this Dagger come with the skill Parry, making it a favorite off-hand weapon for many players.

You can use Parrying Dagger if you prefer an aggressive playstyle, and has strong confidence in your parrying skill. This weapon

With 1.08 Updates, the speed and distance of various attacks have been increased. This includes dagger, making this weapon slightly better to use now.

Reduvia is on this list is not because of it’s Dexterity scaling, but rather it’s scaling with Arcane (A) as well as it’s skill: Reduvia Blood Blade.

Reduvia Blood Blade will launch a blood projectile, causing Blood lost Build up on impact. The range is not really far, but can still be used while staying outside the melee attack range of most enemies.

Elden Ring Curved Greatsword is one of the new weapon types introduced firstly in the release of Elden Ring. Curved Greatsword scale with both Strength and Dexterity, making it a little difficult to come up with a build. However, as soon as you master it, these weapons can be very powerful for an end game build.

Bloodhound’s Fang scale with both Strength and Dex

This weapon is dropped by Bloodhound Knight Darriwil. Bloodhound’s Fang has several unique attacks, and it’s weapon skill allow you to perform a dodging maneuver while dealing big damage. This skill also has great range, making it a very powerful move to trap other players.

Bloodhound’s Fang can also cause blood loss build-up and can be get very early on in the game. Bloodhound Knight Darriwil is a small boss located in Limgrave.

The main issue with Morgott’s Cursed Sword is how to obtain it. You will need to defeat Morgott (Second time) This fight happens really far in Elden Ring, and can be very difficult if you are not well equipped.

Once you got your hand on this weapon, this is definitely the best weapon for any Arcane + Dexterity build. Morgott’s Cursed Sword scale with Arcane (A), Strength (E) & Dexterity (C)

As there are only 8 Katanas in Elden Ring. This can also be the best katana Elden ring compilation list. In Elden Ring,

Used in our Elden Ring Bleed build, Rivers of Blood is a Katana that you can get early in the game. It’s skill Corpse Piler is an upgraded version of the skill Bloody Slash.

Rivers of Blood requires 12 Strength, 18 Dexterity & 20 Arcane. Rivers of Blood also scale with both Dexterity (D) & Arcane (A) making it’s a natural choice for any build involving these two attributes.

Dropped by Bloody Finger Hunter Yurato the north of Murkwater Caveor in his camp near Seaside Ruins Site of Grace.

Can also be obtained by completing Bloody Finger Hunter Yura’s questline at the Second Church of Marika allowing you to also obtain Eleonora’s Poleblade and Purifying Crystal Tear.

This super long Katana is another option if you prefer a cool looking sword for your build. Nagakiba is capable of both thrusting and slashing attack, making it’s a go to weapon for any build that utilize dual wielding

At this place of the list, you probably think that every Dexterity weapon will also scale with Arcane, but Moonveil is another reason why Dexterity build are so versatile. Moonveil is the only Katana that scale with Int (C)

Moonveil Katana can be a little tricky to get, you will need to defeat the Magma Wyrm located in Gael Tunnel-Caelid, but this weapon is definitely a must have if you are planning to build a Samurai with a touch of Magic.

The icing on the cake is definitely the Transient Moonlight skill: Sheathe blade, holding it at the hip in a composed stance. Follow up with either a normal or a strong attack to draw the blade at great speed for an instant slash attack. Both attacks fire off a wave of light, matching the orientation of the blade, with normal attacks firing a horizontal & short-range wave, and strong attacks firing a vertical & long-range wave that travels along the ground.

Obtained by defeating Eleonora, Violet Bloody Finger, at the Second Church of Marika. Eleonora’s Poleblade deal both Fire and Physical Damage, causing the Usual Blood lost build up along with some burning marks.

Godskin Peeler is great for any NG+ Build. You can dual wield 2 Godskin Peeler (fully upgraded with Smithing Stones) then apply Sepukku and you will basically cut through almost all the bosses (Even in NG+)

What is the best Dex Weapon Builds?

In Elden Ring, most dex builds will involve Blood loss – which is the main build up for many Dexterity weapons. Near the end of the game (Level 100+) Players will often incorporate other attributes to their build, a natural option would be Arcane (Rivers of Blood, Morgott’s Cursed Sword or Reduvia)

If you are just starting out with Elden Ring Dex build, be sure to check out our Bleed Build Guide for Elden Ring