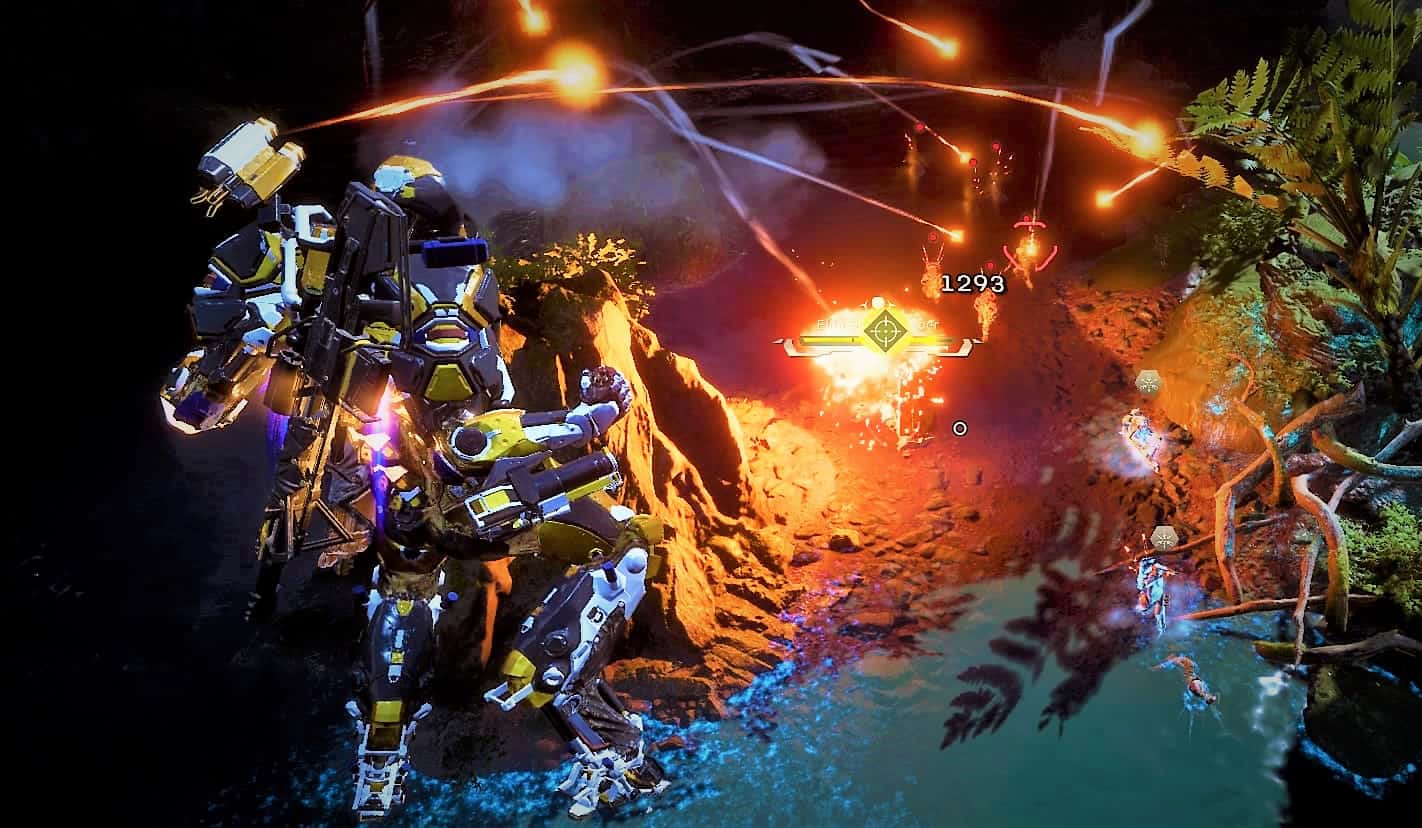 My playthrough of Anthem demo is via PlayStation 4 – Hence the control here is based on Dualshock Controller layout. This guide will be updated once the game is released on Februabry 22, 2019

Being the first playable Javelin in the game. Ranger starts off with very basic equipment, you will get your Relentless your main weapon, along with Seeking Missle and Frag Grenade in Launcher Gear and Grenade Gear slots respectively.

Hovering – Understand when to use this simple feature will save you a lot of time later on.

The controller layout can easily be accessed via Anthem menu. But remember as a pilot, there are a couple of things you may want to utilize when controlling your Javelins.

Update in full game: You can now hovering by pressing either L3 (stationary without diretional input) or R3 while jumping.

(Both ground and Airborne)

(Pressing this during Airborne will result in a downward attack) PRIMER

Shock Mace is your main melee attack. While this provides a short outburst of damage, don’t rush in and be all Bruce Lee with this small mace. This melee attack (and other Javelins close combat attacks except for Interceptor) has a huge delay between each swing.

This melee attack also has primer effect – The one that helps you trigger Combo with any Detonator abilities.

If you still want to use this ability more often. This can be chained by combining Jumping and Dashing in between.

What should we pick for the best Ranger build?

Once you got familiar with the Frag Grenade (default Grenade in the demo) You will then have the chance to pick up the following grenades during your playthrough:

Each grenade has its own special effect but Inferno and Frost Grenade are both capable of causing status effects. In Anthem, this is called Primer – an effect that allows other teammates (or yourself) to trigger Combo.

Seeking Missile is your default gear in this section. Shoot out a missile and it will automatically fly to a nearby target. But don’t be disappointed! Just as grenade gears, you will have the chance to pick up the remaining gears during your playthrough. My first variant of this slot is Spark Beam – a powerful laser attack (its a little hard to aim though)

Another easy to pick gear is Blast Missile – allow Ranger to deliver an explosion in the targeted area.

If you noticed carefully, while Blast Missle look powerful, it does not bear a Detonator icon – meaning it cannot trigger combo on enemies that already been affected by elemental effect (via primer abilities)

Also in the above short gif. You can see Seeking Missile is actually a Detonator ability. If you already carrying a Frost or Inferno Grenade – It is your chance to do a combo!

How to do combo in Anthem:

You or teammates using a Primer Ability (marked by a Primer Icon) and deal Elemental Effect on enemies (Freeze/Burn/Electrocute/Poison) From that point, any Detonator abilities used on these target will result in a combo.

The result is an satisfying sound effect and the HP Bar of your enemies will take a heavy hit!

Here I personally equip Inferno Grenade as my Grenade Gear, and simply slot in Seeking Missle for a quick n dirty combo in this situation

Notes: The shield on that Scar Hunter was down before the combo. While powerful, you need to tear down the shield from your enemies before unleashing your most devastating combo!

Pulse Blast – Another Powerful ability that can finish the combo.

You don’t have the access to Bulwark Point right off the bat in the game. This will later be covered via an in-game story mission.

This ability let Anthem Ranger conjure a force field to block incoming bullets. This is very effective against Scars, your most common enemies during this demo. However, it’s not your all-powerful shield, as it’s will decay depend on the damage it took. Also, this cannot block melee attacks (of course) and flame thrower from those big bad shielded enemies.

Increase Damage instead of protecting

Similar to the Bulwark Point, this ability creates a spherical force field. The catch this time is this field increase the bullet damage of whoever stands behind it. A little risky if you ask me, but this ability could be a great addition to a well-synced team (Imagine all four players stand in a circle, shooting away from the relentless threat!)

We all see it several times. The ultimate that remind us of the classic mech fights – multiple homing rockets toward the poor targets. In Anthem, Ranger has the honor to use this ability as its most powerful attack.

While It is tempting to use this as soon as it appears (Indicating by the right corner bar and activate by Dpad up) Be sure to set yourself up before firing out the barrage. If your team is being surrounded by mobs, try to lock in as many targets as you can. There are ten rockets to be used (Yes I counted) and each lock on will use up the slots.

But if your goal is to deal big damage to just one enemy, then make sure your lock-on is just only on one target!

You won’t get your most powerful equipment during your first story playthrough. As the main focus of any looter-shooter is the end-game content. Most of those shiny Orange (Masterwork) and Yellow (Legendary) Weapons/ Components/ Abilities are dropped in later difficulties (Anthem Grand Master I, II & III)

As the loot you picks will probably different with mine (Thanks to RNG) Consider below loadout as a small example for what makes up a good Ranger Build.

Right of the bat, you can quickly pick up a Maskman Rifle (Warden is a pretty common drop)

Next off, the Sniper Rifle is your best pal. Ranger’s mobility can help you to quickly get into vantage positions. With the help of Muster Point (or in a bad case, Bulwark Point) you can safely snipe out those nasty targets (Deadeye is another common drop in this section)

While Pistol, Heavy Pistol & Shotgun is also available, the current inscription (affixes) on these guns doesn’t really interest me.

For Grenade and Launcher Gear, you should equip yourself to be ready for setting off the combo or able to perform it yourself. Right now, it mostly depends on your luck for the roll on weapons and component. During your story playthrough, the main goal should be utilizing the Combo system by mix and match those abilities.

Bulwark Point & Muster Point are pretty straight forward, one opts for a more aggressive playstyle, another provides a defensive option. If you are still testing the water, Bulwark Point is a decent choice as it can be used for Reviving teammates in the heat of battle.

Hope this helps you gear up with Anthem Ranger – your very first Javelin in the vast world of Anthem. I will continue to update this with my latest Ranger Build shortly (along with the roll and all weapons stat!)