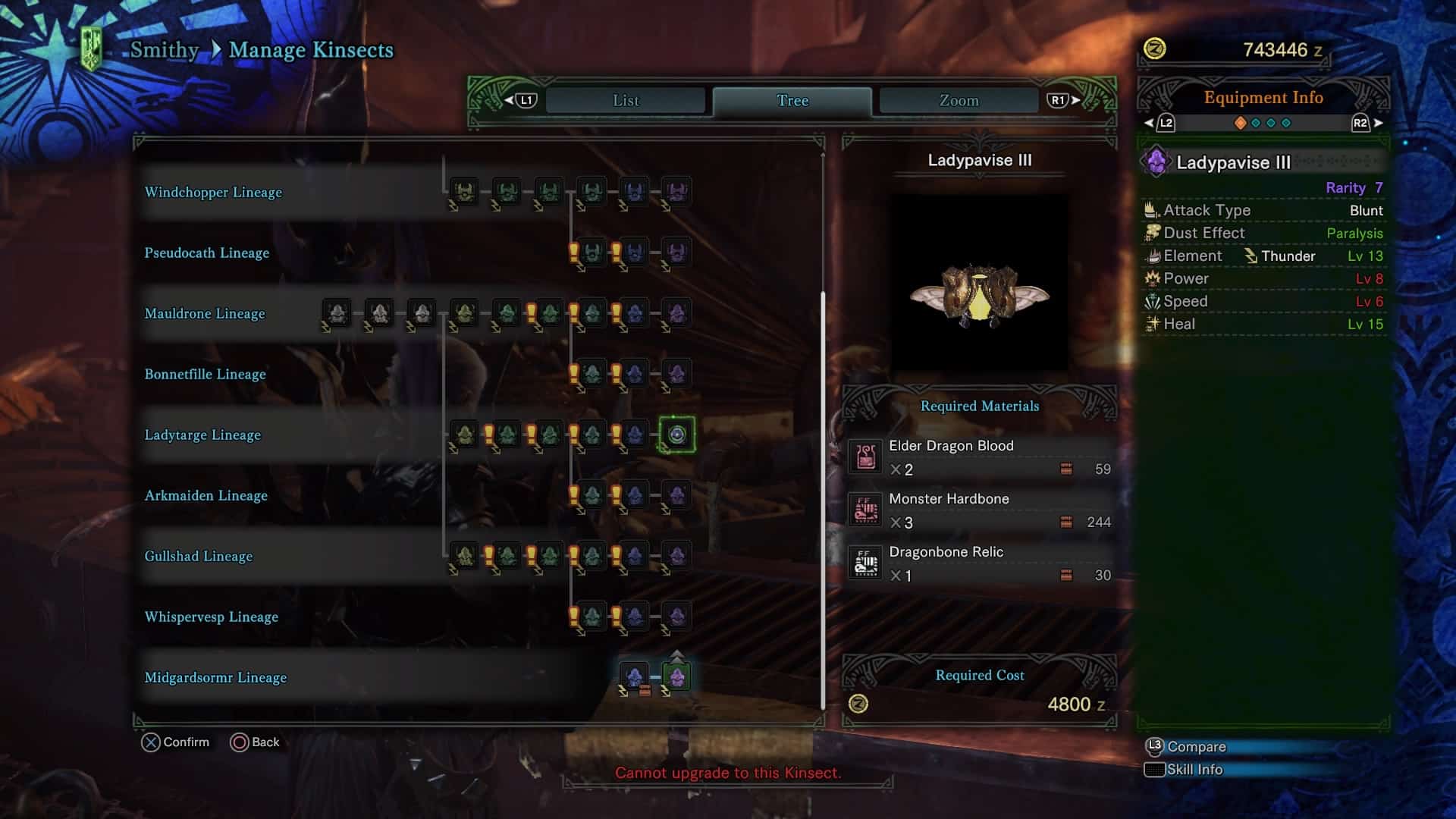 The biggest difference between Insect Glaive compare to other melee weapons is the Kinsect. The number of Kinsects is almost equal to the number of Insect Glaive you can craft. While this may overwhelm new players, trying to categorize and pick Kinsect base on there three main stat is easier to understand

For new players to Insect Glaive, Speed can be the priority when picking Kinsect, because this will shorten the time you need to get the boosts when Kinsect hit certain parts of the monster.

With that said, below are some of the widely used Kinsects, base on their stat of Power, Speed and Heal

Raging Brachydios update gives you one of the easiest armor set to pick in MHW Iceborne. Agitator joins the meta just because of this set’s bonuses.

Kaiser Armors are still used for Master Touch, which is a must for more DPS.

However, the HP drain can be pretty annoying if you are new to Insect Glaive. Some counter this by augmenting their weapon, but this will negate the Resentment bonus, so pick your poison.

This is the current meta of MHW. Fatalis armor provides HP & Stamina bonus, as well as level 4 decoration slots for all of your needs on Armor Skills.

Lightbreak Press from Raging Brachydios dominates this build. Lightbreak Press is easier to craft compare to the Shatter Glaive and has a higher Blast element with Purple Sharpness.

For general play in Guiding Land and for almost all monsters, this build is the easiest one to pick for Insect Glaive (before Fatalis)

As mentioned in Alatreon Guide, Alatreon can start in either Fire or Ice Active mode depend on the mission. In the Special Assignment, he will always start with Fire Active, so an Ince Insect Glaive is your best option for this.

Both of the above build using the standard best element weapon – The Kjárr weapon. One unique thing is that you don’t actually need elemental decoration. The reason for this is because the Kinsect from Insect Glaive is capable of dealing pretty impressive elemental damage, making it’s a huge asset for the fight against Alatreon.

Don’t like farming for Kjárr Insect Glaive? Aside from using craftable elemental Insect Glaive like Wise Fylos (Velkhana) or Fenrir Rose (Frostfang Barioth) you can check out some of the most unique Anti Alatreon Insect Glaive build here.

u/EchoesPartOne reveal one of the best secret regarding the best Elemental Insect Glaive. It’s the Kinsect!

Check out his analysis here

The Black Dragon Armor and Weapon deserve a whole section to explain why it’s meta!

Wanna get technical with all the frame data, hit zones? Check out this data table from Kiranico

The Fatalis Insect Glaive comes with 1101 base damage. This makes this weapon become the new Raw Damage Insect Glaive despite it’s Dragon Element, the True Raw added with this number damage simply overcomes the 300 Blast Proc from your typical Blast Insect Glaive build. To negate this overpower damage a little, this Insect Glaive (as well as other Fatalis weapon) comes with negative -30% Affinity, making hitting 100% Affinity require some trick)

Your best option is a full set of Fatalis armor. However, if you haven’t beat the final boss of MHW, you can gather his material for two pieces to unlock the Inheritance bonus.

AT Velkhana Helm (Gamma) give you a full boost to Coalescence, which can boost your

The rest will be Dragonhide Beta, Dragonclaws Alpha (For Handicraft 3), Dragonbarbs Alpha (For Weakness Exploit) and Dragonfeet Beta.

This Insect Glaive builds max out Agitator & Attack Boost and give you more survivability with Divine Blessing level 5. The sharpness is also covered by Handicraft. This is your go-to build when you reach Fatalis.

While Coalescence boosts your DPS to a new level, it could never proc for monsters that don’t deal elemental blight, so you can swap out the Helm for Dragonhead Beta, which gives you a nice level 3 Stun Resistance.

Before Fatalis, you are good to go with the standard Lightbreak Insect Glaive Build utilize Master Touch and Agitator.

If you haven’t been able to beat Fatalis, failed runs can also gather enough material for crafting two pieces of the full armor, which gives you the inheritance bonus.

This set can easily give you Divine Blessing 5, and if you prefer some utility, slot in jewel for Tool Specialist 5 – which can reduce the cooldown of Mantles – let you have more time to deal with damage to Fatalis.

Tribute to u/EchoesPartOne for this build

Technically, Fatalis is pretty hard to build an Anti set for. Even with maximum Fire Resistance, most of his damaging attacks can still cart you if you are not careful. A typical Anti Fatalis build will often rely on QoL skills like Divine Blessing, Power Prolonger & Health Boost.

This is all about survival. Golden Lunemail was used to unlock Divine Blessing 5, and it also comes with Health Boost. Challenger Jewel 4 will require some grinding to get, but overall, this set gives you the best chance to survive Fatalis while dealing enough damage to slay the beast.

December 10, 2021 No Comments
Throwing Barbarian build may sound odd at first, but it has been around since the original release of Diablo II. It remains the same in …
Read More

December 8, 2021 No Comments
An assassin build that focus on the Traps Skill Tree. One of the best build for new players that coming to Diablo II: Resurrected
Read More

December 8, 2021 No Comments
In this D2R Build, we take a look at Tornado Druid – an all-rounder build that can farm in all areas in Diablo II: Resurrected
Read More
Comments